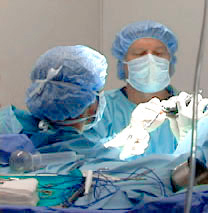 Since April 2000, The Paw Project founder Dr. Jennifer Conrad, Dr. Kirk Wendelburg and other veterinarians working with The Paw Project have performed reparative surgery on over 70 lions, tigers, cougars, leopards, and jaguars that had been victims of declaw surgery. Enjoying relief for the first time after years of suffering, declawed cats that could hobble only a few agonizing steps prior to reparative surgery are able to leap, run, and play much more as nature intended.

Veterinary surgery poses particular challenges generally not encountered in human medicine. Just getting the animal to the operating room can be daunting. The cat is administered tranquilizing medication by means of a dart. When adequately sedated, the cat is taken from its enclosure to the operating room. It requires a crew of several people to carry the cat and position it on the operating table where monitors are attached to check the vital signs of the animal during its long general anesthetic. 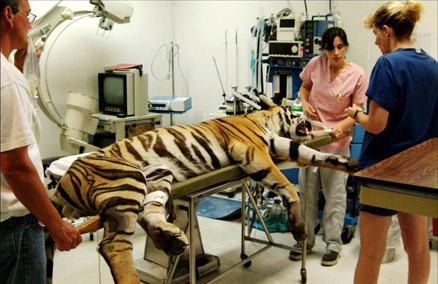 After shaving the fur from the feet and scrubbing them with antiseptic soap, the surgeon makes an incision on the underside of the toe at the site of the former claw. The pad is avoided. In cases where part of third phalanx remains, the partially amputated bone is exposed, infected tissue and nail remnants are cleaned out, and the fragment is then grasped with surgical clamps to mobilize the deep digital flexor tendon. The fragment is removed and a heavy suture is placed in the remaining digital flexor tendon and attached into the extensor tendon on the top surface of the toe. Before the suture is secured, any cartilage remaining on the distal end of the second phalanx is removed and the end of the bone is re-contoured. Tightening the suture will reposition the pad nearer to its proper anatomical position. The incision is closed with tissue glue, and pressure wrap bandages are placed over the paws. 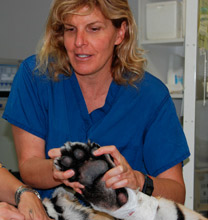 Regretably, the reparative surgery cannot replace what a human has destroyed. These cats will never have the full, normal function of an animal with intact claws, and years of abnormal function may have caused irreversible arthritic changes in their joints.

Reattaching the tendons affords improved extension and flexion of the paws, so the cats can once again grasp objects. Paw Repair surgery enable cats to live free from the pain associated with chronic foot infections and many of the mangling effects of declaw surgery can be reversed. Our veterinarians report that after reparative surgery these magnificent creatures can run and jump where once they could barely hobble.

Dr. Conrad presented a paper describing a reparative technique for declawed big cats at the annual meeting of the American Association of Zoo Veterinarians on October 7, 2002, in Madison, Wisconsin.

DELETERIOUS EFFECTS OF ONYCHECTOMY (DECLAWING) IN EXOTIC FELIDS AND A REPARATIVE SURGICAL TECHNIQUE: A PRELIMINARY REPORT

ABSTRACT
Onychectomy, or declawing, is a controversial and morbid procedure when used in the management of exotic felids. There are three basic techniques, all of which lead to significant gait disturbances and bony deformities. Although each method of onychectomy has a purported rationale, every declawed animal we have encountered manifests some degree of dysfunction, such as abnormal standing conformation and the slow and painful placement of paws during ambulation.

Fourteen declawed exotic felids with morbid sequelae of onychectomy have been treated with a reparative surgical technique. Over 90 percent of these animals have exhibited markedly improved gait and stance 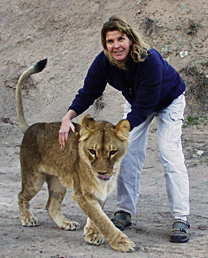 Dr. Jennifer Conrad founded The Paw Project to educate the public about the harmful effects of feline declawing and to rehabilitate big cats, such as lions, tigers, cougars, and jaguars, that have been maimed or crippled by declawing. She has been a proactive spokesperson advocating humane alternatives to declaw surgery and has been interviewed on numerous television and radio programs to raise public awareness about the mutilating effects of feline declawing. She has tirelessly supported legislative efforts in California to ban feline declawing, which is illegal in many countries throughout the world.