December 12, 2017 –  Nova Scotia is the first state or province in the US or Canada to ban declawing, reports Dr. Hugh Chisholm, Paw Project-Atlantic Canada Director.

At its December 12, 2017 meeting, The Council of the Nova Scotia Veterinary Medical Association agreed to the following change in its Code of Ethics – Section 46: A three-month education period will take effect immediately and this change in the Code of Ethics will come into effect on March 15, 2018.

No Member of the Nova Scotia Veterinary Medical Association shall perform the elective and non-therapeutic Partial Digital Amputation (PDA), commonly known as declawing or onychectomy, of domestic cats.

The NSVMA views elective and non-therapeutic PDA as ethically unacceptable.”

Nova Scotia is the first state or province to ban declawing. The new NSVMA position has the force of law and effectively bans declawing in Nova Scotia as members are required to belong to the NSVMA to practice. In Canada, the VMAs serve as regulatory and enforcement bodies for the government.

November 13, 2017 –  Denver City Council unanimously passed a ban on the practice on November 13, 2017. Declaw critics have labeled the procedure, which is common in most states, as inhumane. Denver is the first municipality in the country outside of California to ban declawing. Since 2003, eight cities in California have adopted Paw Project sponsored anti-declaw ordinances. Public opinion was strongly behind the bill.

January 23, 2017 –  The New Jersey Anti-Declaw Bill passed the state Assembly with a 43-10 vote. The bill still must pass the state Senate and be signed by the governor before it becomes law. 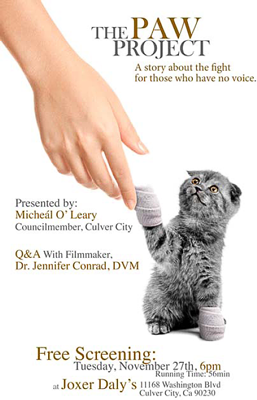 Are there dirty little veterinary secrets that animals can’t tell us?  Declawing is one of the most painful, routinely-performed surgeries in all of veterinary medicine, and yet it is so common that one-quarter or more of all cats in the US are declawed.

The one-hour documentary film The Paw Project is an uplifting David versus Goliath story that chronicles the 12-year battle of the tiny grassroots movement to rehabilitate felines that have been maimed by the mutilating amputation of their toes and its efforts to protect other animals from being subjected to this unnecessary, but lucrative procedure.  Through the tireless efforts of animal welfare advocates and volunteers, millions of cats have had a cruel fate averted in many regions of California. 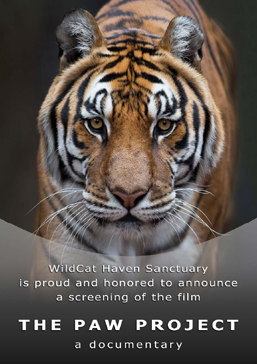 November 18, 2012 – The Paw Project documentary was screened at Portland, Oregon’s Mission Theater.  The screening was sponsored by WildCat Haven Sanctuary and filmmaker Dr. Jennifer Conrad attended in order to discuss the film with the audience in a post-screening Q&A session.  Dr. Conrad and her film were welcomed with rousing expressions of support for her mission and her message—to educate people about the mutilating declawing (deknuckling) procedure, its crippling effects on big and small cats alike and humane alternatives to declawing surgery.

The big takeaway message of the film is that everyone can do something to make a positive difference for our feline friends:  Tell your vet that you don’t approve of declawing and tell five other people – pass it on.

More on the Portland screening at:
The Paw Project movie website 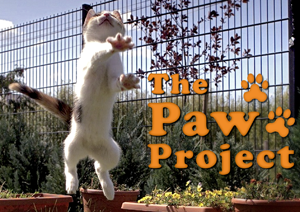 October 24, 2012 – The Paw Project documentary debuted in a screening at the UCLA School of Law on October 24, 2012.  The film chronicles the history of The Paw Project and the 12-year effort led by Dr. Jennifer Conrad to protect both big felines and domestic cats from the cruelty of declawing. The documentary traces her campaigns to ban declawing, which has pitted her against the well-funded professional veterinary associations that have consistently sought to defeat any legislation that would make illegal the inhumane practice of feline declawing.

The documentary has been submitted to the Sundance Film Festival
See the trailer at: www.pawprojectmovie.com

September 26, 2012 – Sacramento, CA.  Governor Signs Bill Banning Forced Declawing and Devocalization of Pets.  Governor Jerry Brown has signed a bill that prohibits landlords from requiring tenants to declaw or devocalize (debark) their animals as a condition of occupancy. California is the first state in the nation to enact such important humane legislation. The bill, SB 1229, was introduced by California State Senator Fran Pavley (D-Agoura Hills) and was co-sponsored by The Paw Project and The Humane Society Veterinary Medical Association (HSVMA). 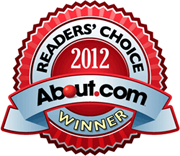 March 29, 2012 – In recognition of the Paw Project’s dedication to enhancing public awareness about the harmful effects of declawing through its web site and its efforts to enact legislation prohibiting declawing, About.com awarded its 2012 RCA Award (in the Cats Categories) to the organization.  Now in its fifth year, 2012 is the first year for the RCA Awards Cats Categories.  Read more »

February 24, 2012 – California State Senator Fran Pavley (D-Agoura Hills) introduced California Senate Bill 1229, a bill to help protect the pets of people who are potential renters. This bill would prohibit landlords from advertising or establishing rental policies requiring tenants’ animals to be declawed or devocalized (de-barked). Some California landlords require the declawing of cats and the devocalizing of dogs as a condition for renting. The Paw Project is proud to have the Humane Society Veterinary Medical Association as its co-sponsor for SB 1229.

November 28, 2011 – The Knesset (Israel’s parliament) banned declawing performed to protect possessions and furnishing. Penalties are stiff: jail time of up to a year or a fine of 75,000 shekels (about $20,000). This humane action will spare cats untold suffering, including lifelong, chronic pain. The legislation was backed by a wide coalition of political parties and was sponsored by Knesset members Eitan Cabel, Yoel Hasson, Dov Khenin and Nitzan Horowitz.

July 10, 2011 – Ovation Network, the arts, music and culture cable channel, airs a Paw Project Public Service Announcement (PSA) through the end of September. The PSA, which was produced by the prestigious international ad agency, McCann Erickson, can be viewed by going to the YouTube Paw Project channel.  Read the press release »

Want to receive a hard copy
of The Paw Project Newsletter?