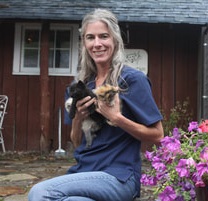 She then practiced in Montana and in Vermont, where she also donated her time at a local Humane Socety, performing free neuters for cats and starting the “homeward bound fund” to help sponsor cats who were in desperate need of homes.

In 2008 and 2009, Dr. Carleton volunteered at Soi Dog, a non-profit organization dedicated to saving the street dogs of Thailand. In 2010, the Humane Society International sponsored Dr. Carleton to travel to Bhutan to assist with their countrywide spay/neuter task force.

Returning to Jackson, Dr. Carleton spent 8 years on the board of the Animal Adoption Center and still donates a large amount of her free time to helping the Center. She founded the Spay/Neuter Wyoming program for low income families in need of assistance. To date, over 12,000 dogs and cats have been altered. Her efforts have helped decrease the number of animals euthanized up to 90% in some towns.

In 2014, Dr. Carleton started her own practice, the Jackson Animal Hospital, in partnership with Dr. Randy Acker. In 2016, Dr. Carleton was named Citizen of the Year by the Jackson Hole Chamber of Commerce for her efforts to help shelter animals and for her veterinary work on the Wind River Indian Reservation.

Dr. Carleton is the proud parent of Mah Di, a three-legged Thai dog who traveled back with her after her first visit to Asia. Since then, she has brought back seven other Thai dogs who have all found amazing homes in Jackson – most likely the luckiest dogs to have ever been born in Thailand!