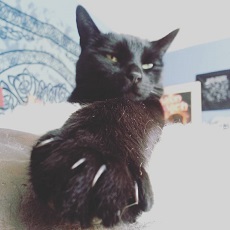 September 12, 2021 – Veterinarians of the Saskatchewan Veterinary Medical Association (SVMA) voted overwhelmingly to ban the practice of declawing cats without a medical reason. The ban became effective immediately upon the publishing of the new bylaw.

The vote made Saskatchewan the eighth of the 10 provinces in Canada to institute a ban on the procedure that amputates the first joint of a cat’s toes. Newfoundland and Labrador, New Brunswick, Alberta, and Manitoba voted to ban the practice earlier in 2019, while British Columbia, Prince Edward Island, and Nova Scotia prohibited it in 2018. Declawing is still legal in Ontario and Quebec. The Paw Project, which has several Director in Canada, has been lobbying Canadian vets to adopt no-declaw policies for years.

“The bylaw for us can be used as a tool to support our refusal to do the procedure,” said Dr. Lesley Sawa, veterinarian and owner of the Animal Clinic of Regina. “When the public comes in asking for this to be done, as a veterinarian it’s our job to educate them on alternatives to declawing and why we feel the declawing procedure is unnecessary.”